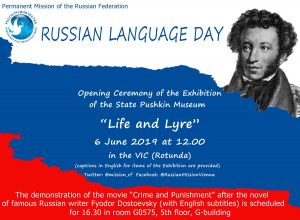 Dear VIC-ground pass holders! We invite you and your families on June 6 to Rotunda to join us for the #Russian language day! Permanent Representative of the Russian Federation🇷🇺 to the International Organizations in #Vienna Mikhail Ulyanov will inaugurate the exhibition dedicated to the life of remarkable Russian poet Alexander Pushkin “Life and Lyre” at 12.00. After that enjoy the Russian traditional folklore band “Kalinka”. Refreshments will be served.

Opening of the Exhibition “Peace through Culture” dedicated to Nicholas Roerich and the history of the Roerich Pact.

We have the honour to invite you to celebrate with us the 70th anniversary of the establishment of diplomatic relations between the Russian Federation and the People’s Republic of China, the Vienna International Centre’s 40th anniversary and the 145th Birthday of Nicholas Roerich on the eve of the 85th anniversary of the Roerich Pact – the first international treaty for the protection of cultural heritage in peace and wartime.

The celebrations are organised by the Club of Russian Art and Literature, the Association of Chinese Culture in Austria, the Austrian Roerich Society – National Committee of the Roerich Pact, and the International Roerich Centre (Moscow), with the support of the Permanent Mission of the Russian Federation to International Organisations in Vienna.

This day is directly linked to the UN System, its history and its basic principles. The UN “was founded after the end of World War II by the victorious allied powers with the hope that it would act to prevent and intervene in conflicts between nations and make future wars impossible or limited…The anniversary of the end of the Second World War holds special importance for the United Nations. The war shaped our mission, and its lessons guide our work” (UN Secretary-General BAN Ki-Moon).

Presentation of the Exhibition “Peace through Culture” dedicated to Nicholas Roerich and the history of the Roerich Pact.